Run, Run Until It's Done!

Bowling Ball is a male contestant in the first season of Battle for Luxurious Hotel.

He got eliminated in the seventh episode, and according to the BFLH 8 votes, got the least to rejoin the game. It is unknown wether he will return at any point, in this season, or future ones.

Bowling Ball is a dark blue bowling ball. His eyes and mouth are white instead of black unlike the rest of the contestants, however, his limbs are still black. He seems to have cracks on his side, as of Run, Run, Until It's Done!. 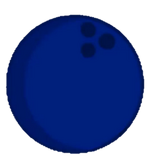 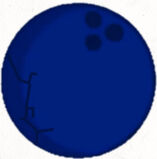 Bowling Ball Asset (cracked)
Add a photo to this gallery
Retrieved from "https://bflh.fandom.com/wiki/Bowling_Ball?oldid=3568"
Community content is available under CC-BY-SA unless otherwise noted.